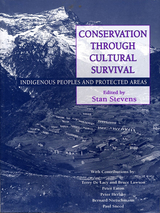 For more than a century the establishment of national parks and protected areas was a major threat to the survival of indigenous people. The creation of parks based on wilderness ideals outlawed traditional ways of life and forced from their homelands peoples who had shaped and preserved local ecosystems for centuries.Today such tragic conflicts are being superseded by new alliances for conservation. Conservation Through Cultural Survival assesses cutting-edge efforts to establish new kinds of parks and protected areas which are based on partnerships with indigenous peoples. It chronicles new conservation thinking and the establishment around the world of indigenously inhabited protected areas, provides detailed case studies of the most important types of co-managed and indigenously managed areas, and offers guidelines, models, and recommendations for international action. The book: discusses the goals and development of the global protected area system assesses the strengths and limitations of a range of different types of indigenously inhabited protected areas discusses key issues and indigenous peoples' concerns recommends measures to promote conservation suggests international actions that would promote co-managed and indigenously managed areas Contributors who have been actively involved in projects around the world provide in-depth accounts from Nepal, Australia, New Guinea, Nicaragua, Honduras, Canada, and Alaska of some of the most promising efforts to develop protected areas where indigenous peoples maintain their rights to settlement and subsistence and participate in management.Conservation Through Cultural Survival will be required reading for environmentalists, protected area planners and managers, and all who care about the future of indigenous peoples and their homelands.
AUTHOR BIOGRAPHY

Stan Stevens is adjunct associate professor in the department of geosciences at the University of Massachusetts, Amherst.