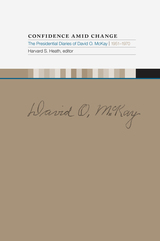 Charismatic and a polished public speaker, LDS President David O. McKay instilled devotion in church members around the globe. An avowed optimist, he maintained a lifelong “faith in mankind; they are God’s children.” His desire to share the Mormon gospel coincided with a deep need to protect the church from outside social pressures, leading him to adopt a nuanced yet politically conservative public image. Though his genial personality aided him in unifying church leadership, McKay’s dislike of interpersonal conflict allowed strong-willed colleagues to sometimes overshadow him. He personally disagreed with apostle Ezra Taft Benson’s advocacy for the right-wing John Birch Society, while allowing Benson and others to promote an extremely conservative political agenda in religious settings.

Similar hesitancy existed in McKay’s failure to lift the priesthood and temple ban against black Mormons. Governing during the height of the Civil Rights movement, he never fully reconciled his belief in human spiritual equality with the racial tensions of his era. The voice of his dedicated secretary Clare Middlemiss often guides the diary’s narratives, revealing not only the personal musings of the church prophet but tracking the birth and development of the modern LDS Church as a social, political, and economic entity.
AUTHOR BIOGRAPHY
Harvard S. Heath is former curator of the Utah and American West Archives at the Harold B. Lee Library, Brigham Young University, where he earned his PhD. He is the editor of In the World: The Diaries of Reed Smoot and a contributor to the modern edition of James E. Talmage’s 1911 House of the Lord: A Study of Holy Sanctuaries Ancient and Modern. He was also lead researcher for BYU President Ernest L. Wilkinson’s four-volume Brigham Young University: The First One Hundred Years.