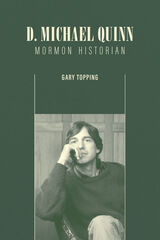 D. Michael Quinn (1944–2021) was one of Mormonism’s greatest historians, though his books have profound relevance to Utah and western history as well. After completing his doctorate in history at Yale University in three years, he taught at Brigham Young University from 1976 to 1988. His treatment of difficult themes in Mormon history drew controversy, which led to resignation from his academic position and to his eventual excommunication from the Church of Jesus Christ of Latter-day Saints. His large, elaborately documented books, such as his three volumes on the Mormon hierarchy and his Early Mormonism and the Magic World View, set a new standard for Mormon historical scholarship.
AUTHOR BIOGRAPHY
Gary Topping is a historian and archivist now retired from Salt Lake Community College and the archives of the Roman Catholic Diocese of Salt Lake City. He grew up on the southern Oregon coast and moved to Utah in 1972 to pursue a PhD in history at the University of Utah. His first professional position was Curator of Manuscripts at the Utah State Historical Society. His other books include Glen Canyon and the San Juan Country, Utah Historians and the Reconstruction of Western History, and Leonard J. Arrington: A Historian’s Life. He lives in Cottonwood Heights, Utah, with his wife, Marianna Hopkins.