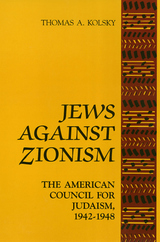 This is the first full-scale history of the only organized American Jewish opposition to Zionism during the 1940s. Despite extensive literature on the Zionist movement, the Jewish opposition to Zionism has received only marginal and usually negative attention. In this impartial study, Thomas A. Kolsky examines the neglected phenomenon of Jewish anti-Zionism, its roots, and its results.

In 1942, a number of dissident Reform rabbis founded the American Council for Judaism, the first and only Jewish organization created to fight against Zionism and the establishment of a Jewish state. Emphasizing the purely religious nature of Judaism and unequivocally rejecting Jewish nationalism, the Council supported free Jewish immigration and equal rights for Jews throughout the world. For Palestine, specifically, it advocated establishment of a democratic state wherein all citizens, regardless of their religion, would enjoy equal political rights.

Summarizing both the history of Zionism and the history of American Jews, Kolsky traces the effects of the Holocaust on the Zionist movement and the personalities that shaped the leadership of the Council. Its position toward Zionism has particular contemporary relevance in understanding the historical relationship between Israel and the Palestinians.

"Kolsky tells well...the story of the ACJ in its prime" —The Christian Century

Preface
1. Zionism and Its Reform Jewish Critics in America Before World War II
2. The Rebellion of the Dissident Reform Rabbis
3. The Formation of the American Council for Judaism
4. The Councils' Wartime Anti-Zionist Campaign
5. Between War and Peace
6. The Search for Compromise in Palestine
7. The Emergence of Israel
Epilogue and Conclusion
Appendix
Notes
Bibliographical Note
Index