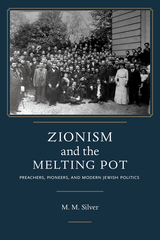 Zionism and the Melting Pot pivots away from commonplace accounts of the origins of Jewish politics and focuses on the ongoing activities of actors instrumental in the theological, political, diplomatic, and philanthropic networks that enabled the establishment of new Jewish communities in Palestine and the United States. M. M. Silver’s innovative new study highlights the grassroots nature of these actors and their efforts—preaching, fundraising, emigration campaigns, and mutual aid organizations—and argues that these activities were not fundamentally ideological in nature but instead grew organically from traditional Judaic customs, values, and community mores.

Silver examines events in three key locales—Ottoman Palestine, czarist Russia and the United States—during a period from the early 1870s to a few years before World War I. This era which was defined by the rise of new forms of anti-Semitism and by mass Jewish migration, ended with institutional and artistic expressions of new perspectives on Zionism and American Jewish communal life. Within this timeframe, Silver demonstrates, Jewish ideologies arose somewhat amorphously, without clear agendas; they then evolved as attempts to influence the character, pace, and geographical coordinates of the modernization of East European Jews, particularly in, or from, Russia’s czarist empire.

Unique in his multidisciplinary approach, Silver combines political and diplomatic history, literary analysis, biography, and organizational history. Chapters switch successively from the Zionist context, both in the czarist and Ottoman empires, to the United States’ melting-pot milieu. More than half of the figures discussed are sermonizers, emissaries, pioneers, or writers unknown to most readers. And for well-known figures like Theodor Herzl or Emma Lazarus, Silver’s analysis typically relates to texts and episodes that are not covered in extant scholarship. By uncovering the foundations of Zionism—the Jewish nationalist ideology that became organized formally as a political movement—and of melting-pot theories of Jewish integration in the United States, Zionism and the Melting Pot breaks ample new ground.
AUTHOR BIOGRAPHY
M. M. Silver is professor of Jewish history at the Max Stern Yezreel Valley College and at the University of Haifa in Israel. He has published books in Hebrew and English that include Our Exodus: Leon Uris and the Americanization of Israel’s Founding Story and Louis Marshall and the Rise of Jewish Ethnicity in America: A Biography.
TABLE OF CONTENTS
Contents
List of Figures
Acknowledgments
Introduction
1. The Indeterminacy of Philosemitism and Antisemitism
2. The Indeterminacy of Nationalism in Jewish Letters through the 1870s
3. The Simmering Melting Pot: Indeterminacy in American Jewish Letters through the 1880s
4. Preachers, Emissaries, and Pioneers: Zionism’s Traditional Foundations
5. Reform, Orthodox, and Conservative: Judaism and the Rise of Jewish Ideology
6. Cultural Zionism or Altneuland: Ahad Ha’am, Herzl, and the Problem of Russian Jewish Modernization
7. Uganda, Russian Jewish Modernization, and Jewish Ideology
8. Out of the Crucible Came Canon: The Making of the Melting Pot
9. Ben-Gurion at Sejera: The Second Aliyah and the Making of Jewish Ideology
Notes
Bibliography
Index