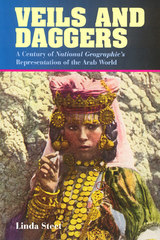 National Geographic magazine is an American popular culture icon that, since its founding in 1888, has been on a nonstop tour classifying and cataloguing the peoples of the world. With more than ten million subscribers, National Geographic is the third largest magazine in America, following only TV Guide and Reader's Digest. National Geographic has long been a staple of school and public libraries across the country.

In Veils and Daggers, Linda Steet provides a critically insightful and alternative interpretation of National Geographic. Through an analysis of the journal's discourses in Orientalism, patriarchy, and primitivism in the Arab world as well as textual and visual constructions of Arab men and women, Islam, and Arab culture, Veils and Daggers unpacks the ideological perspectives that have guided National Geographic throughout its history. Drawing on cultural, feminist, and postcolonial criticism, Steet generates alternative readings that challenge the magazine's claims to objectivity. In this fascinating journey, it becomes clear that neither text nor image in the magazine can be regarded as natural or self-evident and she artfully demonstrates that the act of representing others "inevitably involves some degree of violence, decontextualization, minaturization, etc." The subject area known as Orientalism, she shows, is a manmade concept that as such must be studied as an integral component of the social, rather than the natural or divine world.

Veils and Daggers repositions and redefines National Geographic as an educational journal. Steet's work is an important and groundbreaking contribution in the area of social construction of knowledge, social foundations of education, popular educational media, and social studies as well as racial identity, ethnicity, gender. Once encountered, readers of National Geographic will never regard it in the same manner again.
AUTHOR BIOGRAPHY
Linda Steet is Assistant Professor of Social Foundation of Education and Co-Coordinator of the Women's and Gender Studies Program at the University of Michigan, Flint.
TABLE OF CONTENTS

Afterword: The Bazaar and the Bizarre