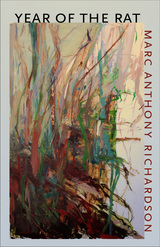 Marc Anthony Richardson's Year of the Rat is a poignant and riveting literary debut narrated in an unabashedly exuberant voice.

In Year of the Rat, an artist returns to the dystopian city of his birth to tend to his invalid mother only to find himself torn apart by memories and longings. Narrated by this nameless figure whose rants, reveries, and Rabelaisian escapades take him on a Dantesque descent into himself, the story follows him and his mother as they share a one-bedroom apartment over the course of a year.

Despite his mother’s precarious health, the lingering memories of a lost love, an incarcerated sibling, a repressed sexuality, and an anarchic inability to support himself, he pursues his dream of becoming an avant-garde artist. His prospects grow dim until a devastating death provides a painful and unforeseeable opportunity. With a voice that is poetic and profane, ethereal and irreverent, cyclical and succinct, he roams from vignette to vignette, creating a polyphonic patchwork quilt of a family portrait.
AUTHOR BIOGRAPHY
Marc Anthony Richardson received his MFA from Mills College. He is an artist and writer from Philadelphia. Year of the Rat is his debut novel.
TABLE OF CONTENTS
Palus Epidemiarium
Lacus Oblivionis
Mare Fecunditatis
Mare Nectaris
Mare Tranquillitatis
Lacus Mortis
Mare Crisium
Mare Frigoris
Sinus Amoris
Palus Somni
Oceanus Procellarum
Mare Cognitum
Acknowledgments
Notes