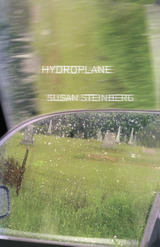 Each of Steinberg's stories builds as if telegraphed. Each sentence glissades into the next as though in perpetual motion, as characters, crippled by loss, rummage through their recollections looking for buffers to an indistinct future.

Susan Steinberg is the author of The End of Free Love. She has a BFA in painting from the Maryland Institute College of Art and an MFA in English from the University of Massachusetts, Amherst. She teachers at the University of San Francisco.