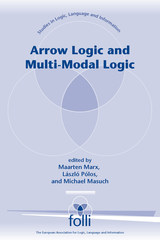 Conceived by Johan van Benthem and Yde Venema, arrow logic started as an attempt to give a general account of the logic of transitions. The generality of the approach provided a wide application area ranging from philosophy to computer science. The book gives a comprehensive survey of logical research within and around arrow logic. Since the natural operations on transitions include composition, inverse and identity, their logic, arrow logic can be studied from two different perspectives, and by two (complementary) methodologies: modal logic and the algebra of relations. Some of the results in this volume can be interpreted as price tags. They show what the prices of desirable properties, such as decidability, (finite) axiomatisability, Craig interpolation property, Beth definability etc. are in terms of semantic properties of the logic. The research program of arrow logic has considerably broadened in the last couple of years and recently also covers the enterprise to explore the border between decidable and undecidable versions of other applied logics. The content of this volume reflects this broadening. The editors included a number of papers which are in the spirit of this generalised research program.