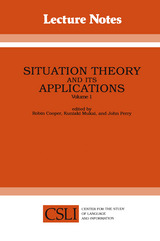 Situation Theory grew out of attempts by Jon Barwise in the late 1970s to provide semantics for "naked-infinitive" perceptual reports such as 'Claire saw Jon run'. Barwise's intuition was that Claire didn't just see Jon, an individual, but Jon doing something, a situation. Situations are individuals having properties and standing in relations. A theory of situations would allow us to study and compare various types of situations or situation-like entities, such as facts, events and scenes.

One of the central themes of situation theory is that a theory of meaning and reference should be set within a general theory of information, one moreover that is rich enough to do justice to perception, communication and thought. By now many people have contributed to the development and application of situation theory, constrained by the need to account for certain kinds of semantic phenomena, and by the need to give a rigorous mathematical account of the principles of information that underwrite the theory.

This volume presents work that evolved out of the First Conference on Situation Theory and Its Applications held by CSLI at Asilomar, California, in March 1989. The nineteen papers included here fall into three categories. Those in Part I explore logical and mathematical issues that arise within situation theory. The papers in Part II connect situation theory with other approaches to logical issues, while those in Part III apply various version of situation theory to a number of linguistic issues.
TABLE OF CONTENTS