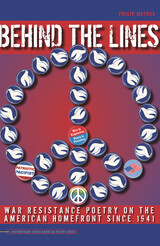 Whether Thersites in Homer’s Iliad, Wilfred Owen in “Dulce et Decorum Est,” or Allen Ginsberg in “Wichita Vortex Sutra,” poets have long given solitary voice against the brutality of war. The hasty cancellation of the 2003 White House symposium “Poetry and the American Voice” in the face of protests by Sam Hamill and other invited guests against the coming “shock and awe” campaign in Iraq reminded us that poetry and poets still have the power to challenge the powerful.
Behind the Lines investigates American war resistance poetry from the Second World War through the Iraq wars. Rather than simply chronicling the genre, Philip Metres argues that this poetry gets to the heart of who is authorized to speak about war and how it can be represented. As such, he explores a largely neglected area of scholarship: the poet’s relationship to dissenting political movements and the nation.
In his elegant study, Metres examines the ways in which war resistance is registered not only in terms of its content but also at the level of the lyric. He proposes that protest poetry constitutes a subgenre that—by virtue of its preoccupation with politics, history, and trauma—probes the limits of American lyric poetry. Thus, war resistance poetry—and the role of what Shelley calls unacknowledged legislators—is a crucial, though largely unexamined, body of writing that stands at the center of dissident political movements.
AUTHOR BIOGRAPHY
Philip Metres is an assistant professor in the Department of English at John Carroll University. He holds a BA in English and peace studies from Holy Cross and a PhD in English and an MFA in poetry from Indiana University. Author of two chapbooks—Instants and Primer for Non-Native Speakers—and two books of poetry in translation, he has received a National Endowment for the Arts fellowship in creative writing and translation.
REVIEWS

“Metres offers a strong riposte to cultural critics who dismiss poetry as monologic and ahistorical; it shows the abiding critical function of the genre by poets who have not only thematized the horrors of war but participated actively in its opposition. At a moment when narrative has become the generic default for cultural criticism, Behind the Lines restores poetry to its important function as a socially symbolic form.”—Michael Davidson, University of California, San Diego