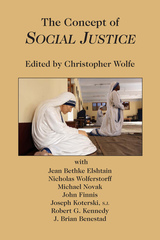 The Concept of Social Justice
by Christopher Wolfe
St. Augustine's Press, 2018
Paper: 978-1-58731-132-1
“Social justice” is a term heard a great deal today, but what does it mean? It does not appear in pre-nineteenth century classic texts on justice. Is it a social agenda inspired by compassion? Is it a particular set of institutional arrangements to achieve justice? What the term means, and – in some quarters – whether it is even a term worth using, is a matter of controversy.

The inspiration for this book comes from the fact that current discussions of “social justice” often deal overwhelmingly with programs that aim to advance certain specific and controversial policies to deal with various social problems. In the process, important theoretical questions about social justice are not even confronted, much less resolved. For example, what does the word “social” add to “justice”? Isn't all justice “social”? What is the relation between “social justice” and more classical Aristotelian terms such as “distributive justice,” “commutative justice,” and “legal justice”? With respect to its current usage, is the term “social justice” applicable only to special policies or programs (e.g., government or nonprofit social welfare programs)? Does it apply only to the provision of material goods and services? Does it play a role in the ordinary everyday world of business and work?

Jean Bethke Elshtain and Michael Novak show various ways in which the term has been misunderstood or narrowed or abused for ideological reasons. Nicholas Wolterstorff’s essay makes careful distinctions necessary to identify the implications of adding “social” to “justice” and fleshes out a valuable notion of the concept. John Finnis locates the origins of social justice in an historical misreading of Thomas Aquinas’ discussion of justice, which narrowed his “general justice” in a way that required a new notion of “social justice.” Joseph Koterksi, S.J., Robert Kennedy, and J. Brian Benestad each elaborate some of the ways in which “social justice” has been used in the Catholic social teaching since Rerum Novarum and in international theological and U.S. episcopal documents.

Readers will come away from this book with a deeper understanding of the origins of social justice, a sensitivity to the frequent abuses of the term, and a recognition of the forms in which it can be a valuable part of today’s political discourse.