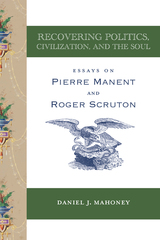 The Western inheritance is under sustained theoretical and practical assault. Legitimate self-criticism has given way to nihilistic self-loathing and cultural, moral, and political repudiation is the order of the day. Yet, as Daniel J. Mahoney shows in this learned, eloquent, and provocative set of essays, two contemporary philosophic thinkers, Roger Scruton and Pierre Manent, have––separately and together––traced a path for the renewal of politics and practical reason, our civilized inheritance, the natural moral law, and the soul as the enduring site of self-conscious reflection, moral and civic agency, and mutual accountability.

Both Scruton and Manent have repudiated the fashionable nihilism associated with the “thought of 1968” and the “Parisian nonsense machine,” and have shown that gratitude is the proper response of the human person to the “givenness of things.” Both defend the self-governing nation against reckless nationalism and the even more reckless temptation of supranational governance and post-political  democracy, what Manent suggestively calls a “kratos” without a “demos.” Both defend the secular state while taking aim at a radical secularism that rejects “the Christian mark” that is at the heart of our inheritance and that sustains the rich and necessary interpenetration of truth and liberty. Scruton’s more “cultural” perspective is indebted to Burke and Kant; Manent’s more political perspective draws on Aristotle, St. Thomas, Tocqueville, and Raymond Aron, among others. By highlighting their affinities, and reflecting on their instructive differences, Mahoney shows how, together, the English man of letters Scruton, and the French political philosopher Manent, guide us to the recovery of a horizon of thought and action animated by practical reason and the wellsprings of the human soul. They show us the humanizing path forward, but first we must make the necessary spiritual decision to repudiate repudiation once and for all.
AUTHOR BIOGRAPHY
Daniel J. Mahoney is professor emeritus at Assumption University and a Senior Fellow at the Claremont Institute. He has written extensively on statesmanship, French political thought, the art and political thought of Aleksandr Solzhenitsyn, conservatism, religion and politics, and various themes in political philosophy. His most recent book is The Statesman as Thinker: Portraits of Greatness, Courage, And Moderation, published by Encounter Books in April 2022.
REVIEWS
“With sophisticated and profound scholarship, Daniel Mahoney deploys his elegant style to defend the soul of civilization. Through the writings of Pierre Manent and Roger Scruton, he charts a course through the political and philosophical turmoil of the present age, providing hope and light amid the prevailing darkness.”
— Mark Dooley, Irish philosopher, writer and journalist. Author of Conversations with Roger Scruton and Sir Roger's literary executor.


“Mahoney's collection of essays does a marvelous job of contextualizing and explaining the vital work of these two philosophers. He's also an engaging and elegant writer.”
— Daniel DiSalvo, City Journal


“A series of reflective essays by Mahoney on the philosophical, theological, and political thinking of our best conservative theorists: Pierre Manent and the late Roger
Scruton. Recovering Politics, Civilization, and the Soul expresses well what we need.” — Richard M. Reinsch II, National Review

TABLE OF CONTENTS
Contents
Introduction: Recovering Politics, Civilization, and the Soul
Chapter 1. Roger Scruton: Defender of the Soul and Civilization
Chapter 2. Communion and Consent: Pierre Manent on the Wellsprings of Western Liberty
Chapter 3. 1968, French Liberal Conservatism, and the Philosophical Restoration of Liberty under Law
Chapter 4. Defending the West in All its Amplitude: The Liberal Conservative Vision of Roger Scruton
Chapter 5. “In the Truth of Our Political Nature”: Pierre Manent’s Defense of Political Reason in A World beyond Politics?
Chapter 6. Truth and Lies: Reflections on Roger Scruton’s Notes from Underground, An Anti-Totalitarian Novel Par Excellence
Chapter 7. The Face of Freedom: The Defense of the Soul in the Thought of Roger Scruton
Chapter 8. Inventing the Authority of a Modern Self
Chapter 9. The Conscience of the Conservative: Reading Against the Tide
Chapter 10. With Reason Attentive to Grace: Pierre Manent’s Correction of Liberalism and Christian Utopianism
Chapter 11. Pierre Manent and the Recovery of the Republican Spirit
A Final Word