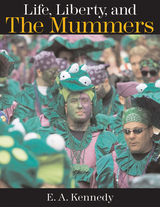 Life, Liberty, and the Mummers
by Ed Kennedy
Temple University Press, 2007
Cloth: 978-1-59213-588-2
The Mummers Parade is like no other parade in the world.  With 10,00 wildly-costumed participants stepping out every New Year's Day in South Philadelphia, it is one of the most spectacular annual parades in the U.S.  This remarkable book is a "family portrait" of the parade.  It presents, in pictures and in words, the flamboyantly-attired Mummers and reveals the everyday, working-class people beneath the outrageous garb.

Noted photographer E. A. Kennedy spent four years documenting the Mummers and their parade.  He has personally selected the striking images included here -- more than 150 in all -- and he has written an engaging history of the parade itself. As Kennedy explains, and as his photos make clear, "mummery" is a way of life for Mummers, who have deep attachments to their clubs, associations, and brigades.

For all its glitz, the Mummers Parade remains a folk parade.  This is the captivating story of the folks behind the parade.
AUTHOR BIOGRAPHY
E.A. Kennedy, III, is an accomplished editorial photographer whose work has appeared in Time magazine, the New York Times, Business Week, the Dallas Morning News, and other publications nationwide. His photographs have been recognized with numerous awards and in 2004, he was chosen as one of the ninety most important African American photographers in the U.S. to participate in a historic celebration of Gordon Parks' 90th birthday. Kennedy has been a contributing photographer for seven photography books, including the internationally-acclaimed Songs of My People: An African American Self-Portrait (and the accompanying exhibit which opened at the Corcoran Gallery in Washington, DC) and America 24/7.
TABLE OF CONTENTS