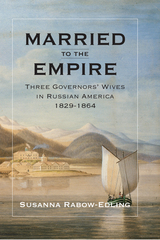 The Russian Empire had a problem. While they had established successful colonies in their territory of Alaska, life in the settlements was anything but civilized. The settlers of the Russian-America Company were drunk, disorderly, and corrupt. Worst of all, they were terrible role models for the Natives, whom the empire saw as in desperate need of moral enlightenment. The empire’s solution? Send in women. In 1829, the Company decreed that any governor appointed after that date had to have a wife, in the hopes that these more pious women would serve as glowing examples of domesticity and bring charm to a brutish territory.

Elisabeth von Wrangell, Margaretha Etholén, and Anna Furuhjelm were three of eight governors' wives who took up this domestic mantle. Married to the Empire tells their stories using their own words and though extraordinary research by Susanna Rabow-Edling. All three were young and newly wed when they left Russia for the furthest outpost of the empire, and all three went through personal and cultural struggles as they worked to adjust to life in the colony. Their trials offer a little-heard female history of Russian Alaska, while illuminating the issues that arose while trying to reconcile expectations of womanhood with the realities of frontier life.
AUTHOR BIOGRAPHY
Susanna Rabow-Edling is a senior research fellow at the Centre for Russian and Eurasian Studies at Uppsala University. She is the author of Slavophile Thought and the Politics of Cultural Nationalism.
REVIEWS
“An interesting, well-written look at the lives of three wives of governors of Russian America in the mid-nineteenth century, with a particular focus on how gender
ideologies aff ected their private and public lives. The sources used are exceptionally rich and include diaries and letters, giving the reader a glimpse into the interior lives
of these women.”
— Slavic Review

Part 1: Elisabeth Von Wrangell
1. The Journey across Siberia to Russian America
2. The Encounter with the New World

Part 2: Margaretha Etholén
3. From Helsinki to Sitka
4. The Inner Life of a Governor’s Wife

Part 3: Anna Furuhjelm
5. The Perfect Wife in the Wilderness
6. A Woman’s Mission and Sphere