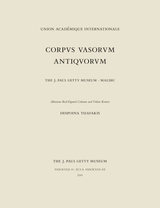 This new fascicule of the CVA—the tenth issued by the J. Paul Getty Museum and the first ever to be published open access—presents a selection of Attic red-figure column and volute kraters ranging from 520 to 510 BCE through the early fourth century BCE. Among the works included are a significant dinoid volute krater and a volute krater with the Labors of Herakles that is attributed to the Kleophrades Painter.