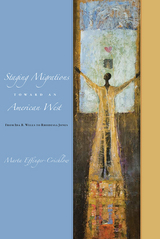 Staging Migrations toward an American West examines how black women's theatrical and everyday performances of migration toward the American West expose the complexities of their struggles for sociopolitical emancipation. While migration is often viewed as merely a physical process, Effinger-Crichlow expands the concept to include a series of symbolic internal journeys within confined and unconfined spaces.

This interdisciplinary study expands the understanding of the African American struggle for unconstrained movement and full citizenship in the United States and will interest students and scholars of American and African American history, women and gender studies, theater, and performance theory.

AUTHOR BIOGRAPHY
Marta Effinger-Crichlow is chair and associate professor in the African American Studies Department at New York City College of Technology-CUNY.
TABLE OF CONTENTS
Cover
Contents
Acknowledgments
Introduction
1. “Tell My People to Go West”
2. “I’d Go [Wherever] They Said ‘Show’ ”
3. "Wherever the Opportunity Was Goin’ to Be I’d a Been Gone”
4. “I Want to Go Home”
Epilogue
Conclusion
Bibliography
Index
REQUEST ACCESSIBLE FILE