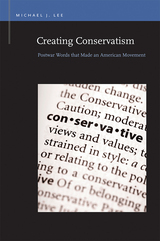 Creating Conservatism charts the vital role of canonical post–World War II (1945–1964) books in generating, guiding, and sustaining conservatism as a political force in the United States. Dedicated conservatives have argued for decades that the conservative movement was a product of print, rather than a march, a protest, or a pivotal moment of persecution. The Road to Serfdom, Ideas Have Consequences, Witness, The Conservative Mind, God and Man at Yale, The Conscience of a Conservative, and other mid-century texts became influential not only among conservative office-holders, office-seekers, and well-heeled donors but also at dinner tables, school board meetings, and neighborhood reading groups. These books are remarkable both because they enumerated conservative political positions and because their memorable language demonstrated how to take those positions—functioning, in essence, as debate handbooks. Taking an expansive approach, the author documents the wide influence of the conservative canon on traditionalist and libertarian conservatives. By exploring the varied uses to which each founding text has been put from the Cold War to the culture wars, Creating Conservatism generates original insights about the struggle over what it means to think and speak conservatively in America.
AUTHOR BIOGRAPHY
Michael J. Lee is Assistant Professor in the Department of Communication at the College of Charleston, where he teaches and researches in the areas of rhetoric and political communication.
TABLE OF CONTENTS
Contents
Acknowledgments
Prologue. The Old Argument Comes Full Circle
Chapter One. The Conservative Canon and Its Uses
Chapter Two. The Traditionalist Dialect
Chapter Three. The Libertarian Dialect
Chapter Four. Fusionism as Philosophy and Rhetorical Practice
Chapter Five. WFB
Chapter Six. Whittaker Chambers’s Martyrdom
Chapter Seven. Conservatism and Canonicity
Notes
Selected Bibliography
Index
REQUEST ACCESSIBLE FILE