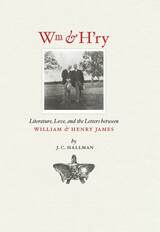 Readers generally know only one of the two famous James brothers. Literary types know Henry James; psychologists, philosophers, and religion scholars know William James. In reality, the brothers’ minds were inseparable, as the more than eight hundred letters they wrote to each other reveal. In this book, J. C. Hallman mines the letters for mutual affection and influence, painting a moving portrait of a relationship between two extraordinary men. Deeply intimate, sometimes antagonistic, rife with wit, and on the cutting edge of art and science, the letters portray the brothers’ relationship and measure the manner in which their dialogue helped shape, through the influence of their literary and intellectual output, the philosophy, science, and literature of the century that followed.
William and Henry James served as each other’s muse and critic. For instance, the event of the death of Mrs. Sands illustrates what H’ry never stated: even if the “matter” of his fiction was light, the minds behind it lived and died as though it was very heavy indeed. He seemed to best understand this himself only after Wm fully fleshed out his system. “I can’t now explain save by the very fact of the spell itself . . . that [Pragmatism] cast upon me,” H’ry wrote in 1907. “All my life I have . . . unconsciously pragmatised.”

Wm was never able to be quite so gracious in return. In 1868, he lashed out at the “every day” elements of two of H’ry’s early stories, and then explained: “I have uttered this long rigmarole in a dogmatic manner, as one speaks, to himself, but of course you will use it merely as a mass to react against in your own way, so that it may serve you some good purpose.” He believed he was doing H’ry a service as he criticized a growing tendency toward “over-refinement” or “curliness” of style. “I think it ought to be of use to you,” he wrote in 1872, “to have any detailed criticism fm even a wrong judge, and you don’t get much fm. any one else.” For the most part, H’ry agreed. “I hope you will continue to give me, when you can, your free impression of my performance. It is a great thing to have some one write to one of one’s things as if one were a 3d person & you are the only individual who will do this.”
AUTHOR BIOGRAPHY
J. C. Hallman is the author of several books, including The Chess Artist, The Devil Is a Gentleman, The Hospital for Bad Poets, and In Utopia.
TABLE OF CONTENTS
Contents
Chapter 1
Chapter 2
Chapter 3
Chapter 4
Chapter 5
Chapter 6
Chapter 7
Chapter 8
Chapter 9
Chapter 10
Chapter 11
Chapter 12
Chapter 13
Chapter 14
Chapter 15
Chapter 16
Chapter 17
Chapter 18
Chapter 19
Chapter 20
Notes
Figure Captions and Credits
Index
REQUEST ACCESSIBLE FILE