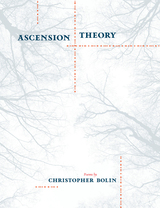 “This meditation,” writes Christopher Bolin in Ascension Theory,“is about appearing without motes between us: / it is practice for presenting oneself to God.” Bolin’s stark and masterful debut collection records a deeply moving attempt to restore poetry to the possibilities of redemptive action. The physical and emotional landscapes of these poems, rendered with clear-eyed precision, are beyond the reaches of protection and consolation: tundra, frozen sea, barren woodlands, skies littered with satellite trash, fields marked by abandoned, makeshift shrines, sick rooms, vacant reaches that provide “nodes / in every direction // for sensing // the second coming.”
Bolin’s eye and mind are acutely tuned to the edges of broken objects and vistas, to the mysterious remnants out of which meaningful speech might be reconstituted. These poems unfold in a world of beautiful, crystalline absence, one that is nearly depopulated, as though encountered in the aftermath of an unnamed violence to the land and to the soul.
In poems of prodigious elegance and anxious control, Bolin evokes influences as various as Robert Frost, James Wright, Robert Hass, George Oppen, and Robert Creeley, while fashioning his own original and urgent idiom, one that both theorizes and tests the prospects of imaginative ascension, and finds “new locutions for referencing / sky.”
AUTHOR BIOGRAPHY
Christopher Bolin lives in St. Joseph, Minnesota, and teaches at the College of St. Benedict / St. John’s University. He has published poems in jubilat, Lana Turner, Post Road, 1913: A Journal of Forms, VOLT,and Cura. He is a recipient of fellowships from the James A. Michener Foundation and the MacDowell Colony, and holds an MFA from the University of Iowa Writers’ Workshop.