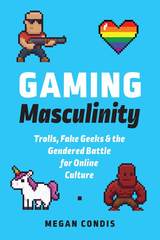 In 2016, a female videogame programmer and a female journalist were harassed viciously by anonymous male online users in what became known as GamerGate. Male gamers threatened to rape and kill both women, and the news soon made international headlines, exposing the level of abuse that many women and minorities face when participating in the predominantly male online culture.

Gaming Masculinity explains how the term “gamer” has been constructed in the popular imagination by a core group of male online users in an attempt to shore up an embattled form of geeky masculinity. This latest form of toxicity comes at a moment of upheaval in gaming culture, as women, people of color, and LGBTQ individuals demand broader access and representation online. Paying close attention to the online practices of trolling and making memes, author Megan Condis demonstrates that, despite the supposedly disembodied nature of life online, performances of masculinity are still afforded privileged status in gamer culture. Even worse, she finds that these competing discourses are not just relegated to the gaming world but are creating rifts within the culture at large, as witnessed by the direct links between the GamerGate movement and the recent rise of the alt-right during the last presidential election.

Condis asks what this moment can teach us about the performative, collaborative, and sometimes combative ways that American culture enacts race, gender, and sexuality. She concludes by encouraging designers and those who work in the tech industry to think about how their work might have, purposefully or not, been developed in ways that are marked by gender.

Megan Condis is an assistant professor in the department of English and creative writing at Stephen F. Austin State University. She writes and designs free-to-play games about her research on her website, megancondis.wordpress.com. She lives in Lufkin, Texas.