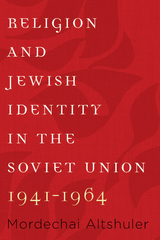 This illuminating study explores the role of religious institutions in the makeup of Jewish identity in the former Soviet Union, against the backdrop of the government’s antireligion policies from the 1940s to the 1960s. Foregrounding instances of Jewish public and private activities centered on synagogues and prayer groups—paradoxically the only Jewish institutions sanctioned by the government—Altshuler dispels the commonly held perception of Soviet Jewry as “The Jews of Silence” and reveals the earliest stirrings of Jewish national sentiment that anticipated the liberation movement of the 1960s and 1970s.
AUTHOR BIOGRAPHY
MORDECHAI ALTSHULER is professor emeritus in The Avraham Harman Institute of Contemporary Jewry, Hebrew University of Jerusalem.
TABLE OF CONTENTS


Contents • Preface • Introduction • FROM RELIGIOUS LENIENCY TO A CAMPAIGN OF OPPRESSION • Soviet Religious Policy in the Wake of the Nazi Invasion, 1941–1948 • The Legalization of Congregations and Synagogues • The Formation of Prayer Groups (Minyanim) • Jewish Spiritual Needs in the Aftermath of the Holocaust• Stalin’s Final Years, 1949–1953: Persecution and the Threat of Liquidation • Public Displays of Jewish Identity: Demonstrations in the Synagogue Square • Khrushchev’s “Thaw,” 1954–1959 • The Public Campaign against Religion • BETWEEN THE PUBLIC AND PRIVATE SPHERES • Rabbis and the Congregational Establishment • Cantors for Hire • Financing Religious Activities • Religious Studies and the Moscow Yeshiva, 1957 • Kosher Slaughter (Shechita) and Matzah Baking • Holiday Observance in the Private Sphere • Charity and the Jewish Needy • Ritual Baths and Circumcision • Cemeteries, Holocaust Memorials, and Burial Societies • The Attitude of World Jewry and Israel to Judaism in the USSR • Conclusion •Notes • Bibliography • Index