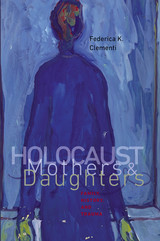 In this brave and original work, Federica Clementi focuses on the mother-daughter bond as depicted in six works by women who experienced the Holocaust, sometimes with their mothers, sometimes not. The daughters’ memoirs, which record the “all-too-human” qualities of those who were persecuted and murdered by the Nazis, show that the Holocaust cannot be used to neatly segregate lives into the categories of before and after. Clementi’s discussions of differences in social status, along with the persistence of antisemitism and patriarchal structures, support this point strongly, demonstrating the tenacity of trauma—individual, familial, and collective—among Jews in twentieth-century Europe.
AUTHOR BIOGRAPHY
FEDERICA K. CLEMENTI is associate professor of English at the University of South Carolina.
TABLE OF CONTENTS


Foreword by Shulamit Reinharz • Acknowledgments • Introduction: Remember What Amalek Did to You • Edith Bruck’s Dead Letters • Lupus in Fabula: The End of the Fairy Tale in Ruth Klüger’s Mother-Daughter Shoah Plot • Auto Da Fé: Sarah Kofman’s Totemic Memoir • Material Mothers: Milena Roth and the Kindertransport’s Legacy, Objets de Mémoire • From the Third Diaspora: Helena Janeczek and the Shoah Second Generation’s Disorders • “I Have to Save Myself with a Joke”: Anne Frank and the Survival of Humor • Epilogue: Remember What Zeus Did to You • Notes • Bibliography • Index