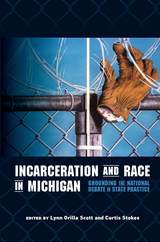 State and local policies are key to understanding how to reduce prison populations. This anthology of critical and personal essays about the need to reform criminal justice policies that have led to mass incarceration provides a national perspective while remaining grounded in Michigan. Major components in this volume include a focus on current research on the impact of incarceration on minority groups, youth, and the mentally ill; and a focus on research on Michigan’s leadership in the area of reentry. Changes in policy will require a change in the public’s problematic images of incarcerated people. In this volume, academic research is combined with first-person narratives and paintings from people who have been directly affected by incarceration to allow readers to form more personal connections with those who face incarceration. At a time when much of the push to reduce prison populations is focused on the financial cost to states and cities, this book emphasizes the broader social and human costs of mass incarceration.
AUTHOR BIOGRAPHY
Lynn Orilla Scott is a retired Professor from James Madison College at Michigan State University who taught research writing classes on incarceration in the United States. She has published widely on the writing of James Baldwin and is a contributing editor to the James Baldwin Review.

Curtis Stokes is Professor of political theory and black politics in James Madison College at Michigan State University. He has edited and authored six books, including the award-winning Malcolm X’s Michigan Worldview: An Exemplar for Contemporary Black Studies and The State of Black Michigan, 1967–2007.
REVIEWS
"Incarceration and Race in Michigan arrives at a significant moment in activism and advocacy around prisons in our state, while struggles for access to higher education, the sentencing of children as adults, and the traumas of an aging prison population reverberate across Michigan. This book provides much needed examinations of struggles around mental health, the effects of solitary confinement, and the suffering youth in our prisons. It also puts the creative writing and visual art of currently and formerly incarcerated people in meaningful conversation with the work of scholars and activists."
—Ashley Lucas, Associate Professor and Director of the Prison Creative Arts Project, University of Michigan


"Lynn Orilla Scott and Curtis Stokes point us to the you are here spot on Michigan’s map of incarceration and race. They navigate the past and present destructive and unjust system while offering a framework to build meaningful change for the future. This book is for all of us: scholars, practitioners, incarcerated communities, wardens, parole officers, and lawmakers. The map is in our hands, let’s work together. I’ll meet you here!"
—Guillermo Delgado, Academic Specialist in Community & Socially Engaged Arts, Michigan State University

TABLE OF CONTENTS
Contents
Foreword, by Charles Corley
Acknowledgments
Introduction
Policing Black/Brown Communities inside/outside the United States: Neoliberalism and the Rise of the "Carceral State" in the Twenty-First Century, by Darryl C. Thomas
Youth of Color and Michigan's Juvenile Justice System, by Michelle Weemhofff and Jason Smith
Basketballs Can Be a Bitch!, by Martin Vargas
Behind Bars: The Current State of U.S. Prison Literature, by D. Quentin Miller
A Sense of Solitary Confĳinement, by Phillip "UcciKhan" Sample
Solo's Life Narrative: Freedom for Me Was an Evolution, Not a Revolution, by Megan Sweeney
Outside the Fences: The Rewilding of the Motor City Viewed from a Prison, by Rand Gould
Criminal Justice, Disconnected Youth, and Latino Males in the United States and in Michigan, by Rubén O. Martinez, Bette Avila, and Barry Lewis
Lox (The Wolverine): The Struggle to Express a Native American Identity in the Carceral State, by Aaron Kinzel
Mass Incarceration and Mental Illness: Addressing the Crisis, by Carolyn Pratt Van Wyck and Elizabeth Pratt
What Works in Prisoner Reentry: Reducing Crime, Recidivism, and Prison Populations, by Dennis Schrantz
Conclusion
Contributors
Index
REQUEST ACCESSIBLE FILE