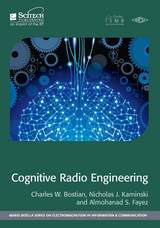 A cognitive radio is a transceiver which is aware of its environment, its own technical capabilities and limitations, and those of the radios with which it may communicate; is capable of acting on that awareness and past experience to configure itself in a way that optimizes its performance; and is capable of learning from experience. In a real sense, a cognitive radio is an intelligent communications system that designs and redesigns itself in real time.

Cognitive Radio Engineering is both a text and a reference book about cognitive radio architecture and implementation, intended for readers who want to design and build working cognitive radios. It takes the reader from conceptual block diagrams through the design and evaluation of illustrative prototypes. An important goal is to bridge the divide between radio engineers, who often have little experience with the computational resource and timing issues inherent in cognitive radios, and computer engineers who often are unaware of RF issues like dynamic range, intermodulation products, and acquisition time.