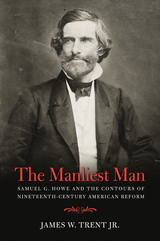 A native of Boston and a physician by training, Samuel G. Howe (1801–1876) led a remarkable life. He was a veteran of the Greek War of Independence, a fervent abolitionist, and the founder of both the Perkins School for the Blind and the Massachusetts School for Idiotic and Feeble-Minded Children. Married to Julia Ward Howe, author of "Battle Hymn of the Republic," he counted among his friends Senator Charles Sumner, public school advocate Horace Mann, and poet Henry Wadsworth Longfellow.

Always quick to refer to himself as a liberal, Howe embodied the American Renaissance's faith in the perfectibility of human beings, and he spoke out in favor of progressive services for disabled Americans. A Romantic figure even in his own day, he embraced a notion of manliness that included heroism under fire but also compassion for the underdog and the oppressed. Though hardly a man without flaws and failures, he nevertheless represented the optimism that characterized much of antebellum American reform.

The first full-length biography of Samuel G. Howe in more than fifty years, The Manliest Man explores his life through private letters and personal and public documents. It offers an original view of the reformer's personal life, his association with social causes of his time, and his efforts to shape those causes in ways that allowed for the greater inclusion of devalued people in the mainstream of American life.
AUTHOR BIOGRAPHY
James W. Trent is professor of sociology and social work at Gordon College. He is author of Inventing the Feeble Mind: A History of Mental Retardation in the United States and Mental Retardation in America.For a talk Trent gave at the Perkins School for the Blind about Samuel G. Howe, please see http://www.youtube.com/embed/Pe8tXwFfuJI
REVIEWS
-- Karen Sanchez-Eppler, Author of Dependent States: The Child's Part in Nineteenth-Century American Culture


-- The Journal of American History