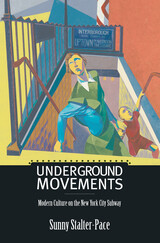 For more than a century the New York City subway system has been a vital part of the city's identity, even as judgments of its value have varied. It has been celebrated as the technological embodiment of the American melting pot and reviled as a blighted urban netherworld. Underground Movements explores the many meanings of the subway by looking back at the era when it first ascended to cultural prominence, from its opening in 1904 through the mid-1960s. Sunny Stalter-Pace analyzes a broad range of texts written during this period—news articles, modernist poetry, ethnic plays, migration narratives, as well as canonical works by authors such as Hart Crane, William Carlos Williams, and Ralph Ellison—to illustrate the subway's central importance as a site of abstract connection, both between different parts of the city and between city dwellers who ride the train together.

Writers and artists took up questions that originated in the sphere of urban planning to explore how underground movement changed the ways people understand the city. Modern poets envisioned the subway as a space of literary innovation; playwrights and fiction writers used it to gauge the consequences of migration and immigration; and essayists found that it underscored the fragile relationship between urban development and memory. Even today, the symbolic associations forged by these early texts continue to influence understanding of the cultural significance of the subway and the city it connects.
AUTHOR BIOGRAPHY
Sunny Stalter-Pace is associate professor of English at Auburn University.