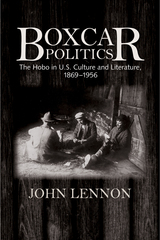 The hobo is a figure ensconced in the cultural fabric of the United States. Once categorized as a member of a homeless army who ought to be jailed or killed, the hobo has evolved into a safe, grandfatherly exemplar of Americana. Boxcar Politics reestablishes the hobo's political thorns.

John Lennon maps the rise and demise of the political hobo from the nineteenth-century introduction of the transcontinental railroad to the Federal Aid Highway Act of 1956. Intertwining literary, historical, and theoretical representations of the hobo, he explores how riders and writers imagined alternative ways that working-class people could use mobility to create powerful dissenting voices outside of fixed hierarchal political organizations. Placing portrayals of hobos in the works of Jack London, Jim Tully, John Dos Passos, and Jack Kerouac alongside the lived reality of people hopping trains (including hobos of the IWW, the Scottsboro Boys, and those found in numerous long-forgotten memoirs), Lennon investigates how these marginalized individuals exerted collective political voices through subcultural practices.
AUTHOR BIOGRAPHY
John Lennon is assistant professor of English at the University of South Florida.