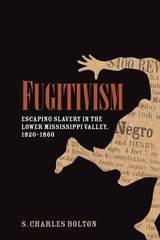 During the antebellum years, over 750,000 enslaved people were taken to the Lower Mississippi Valley, where two-thirds of them were sold in the slave markets of New Orleans, Natchez, and Memphis. Those who ended up in Louisiana found themselves in an environment of swamplands, sugar plantations, French-speaking creoles, and the exotic metropolis of New Orleans. Those sold to planters in the newly-opened Mississippi Delta cleared land and cultivated cotton for owners who had moved west to get rich as quickly as possible, driving this labor force to harsh extremes.

Like enslaved people all over the South, those in the Lower Mississippi Valley left home at night for clandestine parties or religious meetings, sometimes “laying out” nearby for a few days or weeks. Some of them fled to New Orleans and other southern cities where they could find refuge in the subculture of slaves and free blacks living there, and a few attempted to live permanently free in the swamps and forests of the surrounding area. Fugitives also tried to returnto eastern slave states to rejoin families from whom they had been separated. Some sought freedom on the northern side of the Ohio River; othersfled to Mexico for the same purpose.

Fugitivism provides a wealth of new information taken from advertisements, newspaper accounts, and court records. It explains how escapees made use of steamboat transportation, how urban runaways differed from their rural counterparts, how enslaved people were victimized by slave stealers, how conflicts between black fugitives and the white people who tried to capture them encouraged a culture of violence in the South, and how runaway slaves from the Lower Mississippi Valley influenced the abolitionist movement in the North.

Readers will discover that along with an end to oppression, freedom-seeking slaves wanted the same opportunities afforded to most Americans.

S. Charles Bolton is professor emeritus of history at the University of Arkansas at Little Rock and the author of several books on colonial religion and early Arkansas

TABLE OF CONTENTS
Contents
Acknowledgments
Introduction
Chapter 1. The Honest Growler and Absentee Slaves
Chapter 2. Like Ants into a Pantry
Chapter 3. I Had Rather a Negro Do Anything Else Than Runaway
Chapter 4. De Boat Am in De River
Chapter 5. The Urban Runaway
Chapter 6. Stealing Slaves to Sell or Save
Chapter 7. Each One Is Made a Policeman
Chapter 8. Federal Fugitives, the Kidnapper Captain, and Gruesome Stories
Postscript
Appendix
Notes
Bibliography
Index
REQUEST ACCESSIBLE FILE