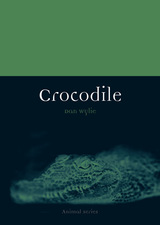 “Tick, tock, tick, tock.” Thanks to Peter Pan, this sound, if heard near water, means run: a hungry crocodile is on its way. J. M. Barrie isn’t fully to blame for spreading the word that crocodiles are our enemies, or at least the enemies of one-handed pirates—innumerable songs, stories, and legends have characterized these reptiles as a symbol of pitiless predation and insatiable appetite. Tracking twenty-three crocodilian species from India and Egypt to Africa, Australia, and beyond, Crocodile advocates that we do a complete one-eighty in our views of these magnificent creatures.

Dan Wylie traces the crocodile in myth, art, and literature, demonstrating that though we commonly associate the reptiles with ferocity and deceit, they have also often been respected and revered in human history. Discussing how crocodiles were all but wiped out in the middle of the twentieth century by hunters and skin traders and are now making a comeback, he reveals that, as apex predators, they are today an increasingly important indicator of the health of an ecosystem and may outlive humans like they did dinosaurs. Presenting a concise, cogent case for why we should respect these fearsome animals, this beautifully illustrated volume is a tribute to one of the world’s ultimate survivors.
AUTHOR BIOGRAPHY
Dan Wylie is professor of English at Rhodes University, Grahamstown, South Africa. He is the author of Elephant (2008), also published by Reaktion Books.
TABLE OF CONTENTS