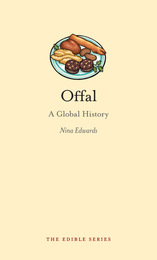 “Offal” has the same pronunciation as “awful”—an appropriate homophone, given that offal comprises the whole spectrum of an animal’s glands, essential organs, skin, muscle, guts, and every unmentionable in between. Yet as Nina Edwards shows in this intriguing history, offal has been consumed and enjoyed across ages and continents, often hidden by the rich variety of terms—like fois gras and sweetbread—that have evolved to veil their origins.

Edwards dissects the complicated relationship we have with offal and the extreme reactions it inspires, asking if we can enjoy a pig’s heart, a cow’s eyes, or a sheep’s brain when it reminds us so viscerally of our own flesh and blood. She explores the offal dishes that are specific to regional cuisines and holidays, such as Scottish haggis, Jewish chopped liver, and Southern states’ chitterlings. As she reveals, offal is a food of contradictions—it is high in nutrients but also dangerously high in cholesterol, and it can range from expensive haute cuisine to a cheap alternative for the impoverished. From tongue in Sichuan and gizzard stew in Rio de Janeiro to spicy cartilage in Calcutta, Offal sheds new light on the sometimes stomach-churning foods we consume.
AUTHOR BIOGRAPHY
Nina Edwards is a freelance writer and actor living in London and the author of On the Button: The Significance of an Ordinary Item.
REVIEWS
“As a vegetarian, owning a book about edible entrails may seem unusual, but nonetheless, Nina Edwards’ Offal : A Global History rests conspicuously on my bookshelf. This book is hardly a tome at 108 pages, yet it manages to give a very comprehensive history of one of the world’s more controversial cuisines.”
— The Inquisitive Eater