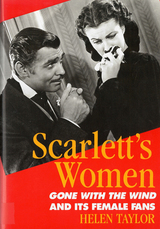 One of the most successful books ever published and the basis of one of the most popular and highly praised Hollywood films, Gone with the Wind has entered world culture in a way that few other stories have. The book was published in June 1936; the film premiered on December 15, 1939. The book has sold 25 million copies, has been translated into twenty-seven languages, and won the 1936 Pulitzer Prize. The film received eight Oscars and has been called the greatest movie ever made. Everyone has heard of GWTW. Most of us have seen the movie or read the novel. In this entertaining and informative book, Helen Taylor is the first to seek reasons for the film/novel's success among viewers/readers. The author asked GWTW fans to relate their experiences with the works, to explain their fascination with the story, to describe the impact GWTW has had on their lives. The results are astonishing and illuminating. In the United States and England, where the author conducted her research, women have to a remarkable degree claimed the story Margaret Mitchell wrote as their own. They name their children Rhett and Scarlett. They see in the lives of the men and women of GWTW their own lives, their own restlessness, their own aspirations for something better than marriage and motherhood. Helen Taylor not only explains the enduring appeal of the work, but also identifies different kinds of response at particular historical moments (especially World War II) and through the past five decades by women of different classes, races, and generations. The author also looks at the contemporary implications of the work's political conservatism, racism, and--paradoxically--feminism. The result is a book that is sophisticated, accessible, and revealing. Scarlett's Women is a book for eery fan, and for all students of film and popular culture.
AUTHOR BIOGRAPHY
About the Author
Helen Taylor has written extensively on women's writing and popular culture. An active participant in the Daphne du Maurier Festival, Fowey, and on the Board of Bath Festivals Trust, she is currently Professor of English at the University of Exeter