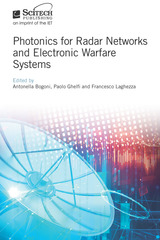 Microwave photonics is an emerging interdisciplinary area that investigates the deep interactions between microwaves and light waves for efficient generation, distribution, processing, control, and sensing of microwave, millimeter-wave, and terahertz signals. This book outlines the potential for microwave photonics in radar and electronic warfare systems, covering basic concepts and functions, comparing performance with conventional systems, describing its impact on digital signal processing, and exploring integration issues.

Chapters are written by global experts in radar, radar networks, electronic warfare systems and microwave photonics, who have been or are currently collaborating on these new applications of photonics at a system level, providing detailed and clear interdisciplinary information at research and industrial level for both the radar/EW and photonics communities.