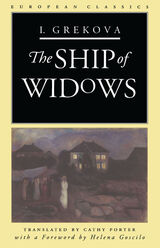 The Ship of Widows
by I. Grekova
translated by Cathy Porter
foreword by Helena Goscilo

Northwestern University Press, 1994
Paper: 978-0-8101-1144-8
"My husband was killed at the front right at the beginning of the war." Thus opens The Ship of Widows, the story of five women brought together in a large communal apartment by the vagaries of war in the year 1943. It spotlights the female experience of World War II: the fate of those not at the front, but still forced to fight as desperately to survive starvation, cold, and exhaustion, and to maintain homes and a country to which the soldiers can return. The Ship of Widows reveals an seldom-seen period of Russia's history and an understudied segment of its population—its women.
TABLE OF CONTENTS