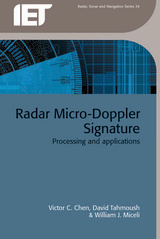 The micro-Doppler effect appears as Doppler frequency modulations in coherent laser or microwave radar systems induced by mechanical vibrations or rotations of a target or any part on the target. These Doppler modulations become a distinctive signature of a target that incorporates vibrating or rotating structures, and provides evidence of the identity of the target with movement.

Radar Micro-Doppler Signatures: Processing and applications will be of interest to R&D researchers and engineers in government research centers, industries, and universities around the world who work on radar imaging and signal analysis, target feature extraction, and non-cooperative target recognition.