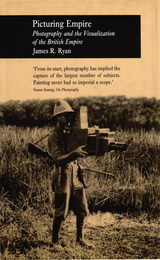 Coinciding with the extraordinary expansion of Britain's overseas empire under Queen Victoria, the invention of photography allowed millions to see what they thought were realistic and unbiased pictures of distant peoples and places. This supposed accuracy also helped to legitimate Victorian geography's illuminations of the "darkest" recesses of the globe with the "light" of scientific mapping techniques.

But as James R. Ryan argues in Picturing Empire, Victorian photographs reveal as much about the imaginative landscapes of imperial culture as they do about the "real" subjects captured within their frames. Ryan considers the role of photography in the exploration and domestication of foreign landscapes, in imperial warfare, in the survey and classification of "racial types," in "hunting with the camera," and in teaching imperial geography to British schoolchildren.

Ryan's careful exposure of the reciprocal relation between photographic image and imperial imagination will interest all those concerned with the cultural history of the British Empire.
TABLE OF CONTENTS