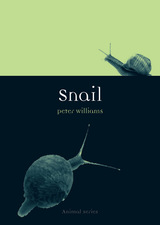 So attached was the author Patricia Highsmith to snails that they became her constant travelling companions. Often hidden in a large handbag, they provided her with comfort and companionship in what she perceived to be a hostile world. Theirs was perhaps an unusual relationship; for most of us the tentacled snail with his sticky trail might be a delicious treat served up in garlic butter but certainly not an affectionate pet. As well, for many a gardener, opinions on the snail and slug (which is a just a snail without a shell) have been shaped by the harm they inflict on vegetable plants and seedlings. With Snail, Peter Williams wishes to change our perspectives on this little but much-maligned creature.

Beginning with an overview of our relationship with snails, slugs, and sea snails,

Williams moves on to examine snail evolution; snail behavior and habitat; snails as food, medicine, and the source of useful chemicals and dyes; snail shells as collectible objects; and snails in literature, art, and popular culture. Finally, in this appreciative account of the snail, Williams offers a plea for a reconsideration of the snail as a dignified, ancient creature that deserves our respect.

Containing beautiful illustrations and written in an approachable, informal style, Snail will help readers get beyond the shell and slime to discover the fascinating creature inside.

Peter Williams is a doctor based in Oxford, England.

REVIEWS
"From the use of marine-snail shells in antiquity and the discovery of the snail's suprisingly complex anatomy in 18th-century dissections, to the symbolism of monopods in painting and literature (they stand, or rather slime, for slowness as a "way of life"), this book exerts a hypnotic fascination."
— Steven Poole, Guardian (UK)

"An enjoyable PR job for the mollusc."–Independent (UK)

“In Peter Williams’s Snail, we discover that human-mollusk interactions go far further back than allotments—all the way to some of the earliest forms of money and adornment. Admirably the book also forced me to reconsider my vigorous prejudice against the slimy, seedling-munching beasts. In fact, the opening paragraph is so striking that it alone won me over.” —BBC Wildlife Magazine

“Snails seem an unpromising subject for a book; yet Peter Williams presents these much-maligned creatures in a sympathetic light. Many of his illustrations bear witness to the beauty of their shells, and the evolution, growth and geometry of these structures makes a fascinating story.” —International Zoo News

Definitions and Etymology
1  Our Relationship with the Snail
2  The Quintessential Snail
3  Sense and Sensibility
4  A Brief History of Snails
5  Sex and the Single Snail
6  Garlic Butter and Ginger Beer
7  Snail Art
8  The Snail Reconsidered
Timeline of the Snail
Appendix: The Ballad of the Veliger
References
Select Bibliography
Recipes
Websites and Associations
Acknowledgements
Photo Acknowledgements
Index