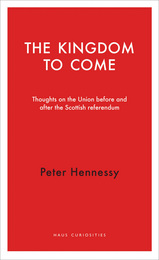 Despite the “No” vote in the Scottish Independence Referendum of September 2014, the issue of potential Scottish secession from the United Kingdom has likely only just begun. The Kingdom to Come is the first book-length look at the consequences and implications of this momentous event.

Peter Hennessy discusses the run-up to the Scottish Independence Referendum and its immediate aftermath, as well as the constitutional issues the referendum opened for the entire United Kingdom. This book includes Hennessy’s personal impressions of recent questioning of the Acts of Union that created Great Britain and describes when he, as the top expert on Britain’s unwritten constitution, became an important voice in what might happen next. The Kingdom to Come also offers a valuable examination of the possible agenda for remaking the constitution in both the medium and long term.
AUTHOR BIOGRAPHY
Peter Hennessy is the Attlee Professor of Contemporary British History at Queen Mary University of London. Baron of Nympsfield since 2010, he is also a fellow of the British Academy.
REVIEWS
“Lord Hennessy’s book is . . . a profound insight into the way in which British politics and the political processes work. It delves into Britain's constitutional vagaries, the question of whether the UK should adopt a formal constitution, and highlights how Britons of the various and distinct cultures view their own overarching sense of identity.”
— Defense & Foreign Affairs Special Analysis


Introduction
Thoughts from South Ronaldsay: Hope, anxiety, and the shadow of Orwell

Part one
The result: the view from Westminster
The constitutional building site & the Kingdom to come
Mutual flourishing?

Epilogue
Maps in the mind