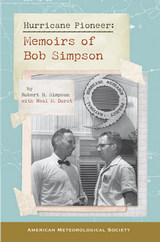 In 1951, Robert H. Simpson lifted off in a specially-equipped plane, flying directly into the path of a storm that would send most people running for cover. For more than four hours he observed Typhoon Marge from its eerily calm eye, later describing it in The Bulletin of the American Meteorological Society as “a coliseum of clouds whose walls on one side rose vertically and on the other were banked like the galleries in a great opera house.”

For Simpson this was just one of his many pioneering explorations of hurricanes and extreme storms. Over his decades-long career his research led to great leaps in our understanding of tropical meteorology and our approach to hurricane safety. He was the first director of the National Hurricane Research Project and the second director of the National Hurricane Center, though he may be best known as co-creator of the widely used Saffir-Simpson Hurricane Scale, familiar to anyone who has heard a reporter use the words “category five.”

Simpson’s memoirs take readers from his experience with the Corpus Christi hurricane of 1919 to his travels to study weather across the globe. Along the way he crosses paths with other weather greats, including his trailblazing wife, meteorologist Joanne Simpson. Hurricane Pioneer is a riveting first-hand account at a revolutionary time in meteorology.
AUTHOR BIOGRAPHY
Robert H. Simpson (1912–2014) was the first director of the National Hurricane Research Project and former director of the National Hurricane Center. Neal M. Dorst is a meteorologist in the Hurricane Research Division of the National Oceanic and Atmospheric Administration.
REVIEWS
“Few in the world of atmospheric science have enjoyed a career as varied, illustrious, and extended as the one carved out by Simpson, who died in late 2014 at the age of 102. We’re lucky that Simpson took the time to document his busy life in detail, as told in Hurricane Pioneer. . . . Five stars for the gentle eloquence of its narrator and for its unique perspective on a twentieth-century life in atmospheric science.”
— Robert Henson, Weather Underground