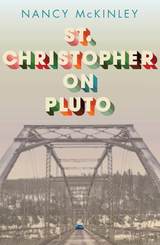 MK and Colleen get reacquainted while working at different stores in a bankrupt mall. Way back, the women went to Catholic school together and collaborated on racy letters to a soldier in Vietnam who thought they were much older than seventh graders—a ruse that typifies later shenanigans, usually brought on by red-headed Colleen, a self-proclaimed “Celtic warrior.”

After ditching Colleen’s car to collect the insurance, they drive from one unexpected event to the next in Big Blue, MK’s Buick clunker with a St. Christopher statue glued to the dash. The glow-in-the-dark icon guides them past the farm debris, mine ruins, and fracking waste of the northern brow of Appalachia. Yet their world is not a dystopia. Rather, MK and Colleen show why, amid all the desperation, there is still a community of hope, filled with people looking out for their neighbors and with survivors who offer joy, laughter, and good will.

AUTHOR BIOGRAPHY
Nancy McKinley is a founding fiction faculty member at Wilkes University, where she teaches at the Maslow Family Graduate Program in Creative Writing. She is the author of Travels with a Nuclear Whore, which won the Thayer Fellowship in the Arts, and is a recipient of the Newhouse Award from the John Gardner Foundation.