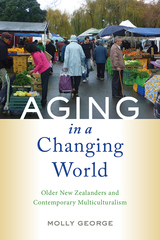 This is a story about aging in place in a world of global movement. Around the world, many older people have stayed still but have been profoundly impacted by the movement of others. Without migrating themselves, many older people now live in a far “different country” than the one of their memories. Recently, the Brexit vote and the 2016 election of Trump have re-enforced prevalent stereotypes of “the racist older person”. This book challenges simplified images of the old as racist, nostalgic and resistant to change by taking a deeper, more nuanced look at older people’s complex relationship with the diversity and multiculturalism that has grown and developed around them. Aging in a Changing World takes a look at how some older people in New Zealand have been responding to and interacting with the new multiculturalism they now encounter in their daily lives. Through their unhurried, micro, daily interactions with immigrants, they quietly emerge as agents of the very social change they are assumed to oppose.
AUTHOR BIOGRAPHY
MOLLY GEORGE is a research fellow at the Centre for Pacific Health and the Department of General Practice and Rural Health at the University of Otago in Dunedin, New Zealand.
REVIEWS
"Sure to become a classic of urban ethnography. A powerful and much needed account of the way in which older people respond to and negotiate change within urban communities. The research challenges views which present older people as 'victims' of global change, providing a highly nuanced description of both the perceived challenges of migration, but also the positive ways in which it is incorporated into new ways of adapting to social change."
— Christopher Phillipson, co-editor of Precarity and Ageing: Understanding Risk and Insecurity in Later Life

"Molly George’s book beautifully upends common assumptions about the widespread racism amongst elderly white Americans, Brits, and New Zealanders, offering a much more nuanced portrait of how ethnicity and migration are viewed by older generations. Examining everyday interactions between long-term residents and newcomers, Aging in a Changing World challenges stereotypical views of what it means to 'age in place' when places, and the people who occupy them, are in fact ever-changing. The result is a thought-provoking examination of multiculturalism as lived experience for the elderly."
— Susanna Trnka, author of Traversing: Embodied Lifeworlds in the Czech Republic