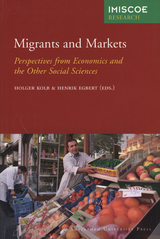 Over the course of their interaction, economics and migration research have treated each other with mutual indifference. When migration research attempted to overstretch its bounds, economics reduced its analytical scope to those areas that originally seemed to belong to the genuine economic sphere. This volume considers eleven case studies that aim to overcome the artificial barrier between the two disciplines by applying the economic method to migratory phenomena, utilizing economic theories in order to explain migratory patterns, and regarding the structure and development of markets as crucial to the shaping of population stocks and the flow of migrants.
AUTHOR BIOGRAPHY
Holger Kolb is a researcher at the University of Osnabrück’s Institute for Migration Research and Intercultural Studies. Henrik Egbert is a research associate in the Department of Behavioral and Institutional Economics at Justus-Liebig University in Giessen, Germany.
REVIEWS
“Aiming to bridge different disciplinary approaches, especially economics and other social sciences, this anthology is an invaluable addition to the interdisciplinary literature in the field of migration."

"Migrants and Markets is an excellent example of fruitful cooperation among economists, sociologists and political scientists. From the impact Chinese student migration has on the UK and France to varying methodologies for remittance research, the array of topics is testament to how different fields can mutually enrich each other.”

-- Thomas Straubhaar, Director of the Hamburg Institute of International Economics and Professor of Economics at the University of Hamburg

Migrants and Markets: Perspectives from Economics and the Other Social Sciences

The Impact of Immigration on the Labour Market: A Survey

Investigating the Economic Impact of Immigration on the Host Country: The Case of Norway

The Exit Option of Labour Migration from East to West Germany: Individual and Contextual Determinants of Unemployed Workers’ Geographic Mobility

States as Clubs? The Political Economy of State Membership

Chinese Student Migration in Europe: A Migration That Nobody Objects To?

Assessing Interdependencies between Sector Structures and Labour Migration: A Comparative Study of the British and the German Health Sectors

Skills and Remittances: The Case of Afghan, Egyptian and Serbian Immigrants in Germany

The Impact of Migration on Foreign Trade in Bolivia