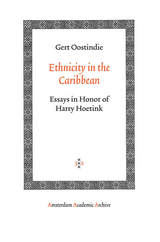 BUY
Ethnicity in the Caribbean: Essays in Honor of Harry Hoetink
edited by Gert Oostindie
Amsterdam University Press, 2006
eISBN: 978-90-485-0407-7
Paper: 978-90-5356-851-4
Race and biologized conceptions of ethnicity have been potent factors in the making of the Americas. They remain crucial, even if more ambiguously than before. This collection of essays addresses the workings of ethnicity in the Caribbean, a part of the Americas where, from the early days of empire through today’s post-colonial limbo, this phenomenon has arguably remained in the center of public society as well as private life. These analyses of race and nation-building, increasingly significant in today’s world, are widely pertinent to the study of current and international relations.

The ten prominent scholars contributing to this book focus on the significance of ethnicity for social structure and national identity in the Caribbean. Their essays span a period from the initial European colonization right through today’s paradoxical balance sheet of decolonization. They deal with the entire region as well as the significance of the diaspora and the continuing impact of metropolitan linkages. The topics addressed vary from the international repercussions of Haiti’s black revolution through the position of French Caribbean békés and the Barbadian ‘redlegs’ to race in revolutionary Cuba; from Puerto Rican dance etiquette through the Latin American and Caribbean identity essay to the discourse of Dominican nationhood; and from a musée imaginaire in Guyane through Jamaica’s post independence culture to the predicament of Dutch Caribbean decolonization. Taken together, these essays provide a rare and extraordinarily rich comparative perspective to the study of ethnicity as a crucial factor shaping both intimate relations and the public and even international dimension of Caribbean societies.
AUTHOR BIOGRAPHY
Gert Oostindie is Director of the KITLV/Royal Institute of Linguistics and Anthropology in Leiden and Professor of Caribbean Studies, Utrecht University.
REVIEWS
'The range is impressive ... as thorough a baptism into the complexities of race and classpokitics in the Caribbean as a layman is likely to find.. intimacy and sophistication' - Caribbean Beat
TABLE OF CONTENTS


Contents - 10 The Contributors - 12 Acknowledgements - 15 Ch 1: Introdudtion: ethnicity, as ever? - 18 Ch 2: Race, culture and identity in the New World:five national versions - 39 Ch 3: Ethnic difference, plantation sameness - 56 Ch 4: Haiti and the terrified consciousness of the Carribean - 70 Ch 5: Museums, ethnicity and nation-building: reflections from the French Carribean - 98 Ch 6: Ethnicity and social structure in contemporary Cuba - 123 Ch 7: 'Constitutionally white': the forging of a national identity in the Dominican Republic - 138 Ch 8: The somatology of manners: class, race and gender in the history of dance etiquette in the Hispanic Carribean - 169 Ch 9: Jamaican decolonization and the development of national culture - 199 Ch 10: Ethnicity, nationalism and the exodus: the Dutch Carribean predicament - 223 Index - 250