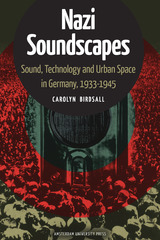 Many images of Nazi propaganda are universally recognizable, and symbolize the ways that the National Socialist party manipulated German citizens. What might an examination of the party’s various uses of sound reveal? In Nazi Soundscapes, Carolyn Birdsall offers an in-depth analysis of the cultural significance of sound and new technologies like radio and loudspeaker systems during the rise of the National Socialist party in the 1920s to the end of World War II. Focusing specifically on the urban soundscape of Düsseldorf, this study examines both the production and reception of sound-based propaganda in the public and private spheres. Birdsall provides a vivid account of sound as a key instrument of social control, exclusion, and violence during Nazi Germany, and she makes a persuasive case for the power of sound within modern urban history.
AUTHOR BIOGRAPHY

Carolyn Birdsall is assistant professor of media studies at the University of Amsterdam.

1. Affirmative Resonances in Urban Space
2. The Festivalisation of the Everyday
3. Mobilising Sound for the Nation at War
4. Cinema as a Gesamtkunstwerk?

Afterword: Echoes of the Past
Notes
Bibliography
Track List
Index