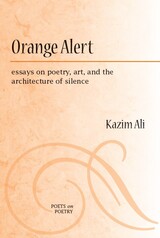 "With their delicacy of attention and bold range of subjects, Kazim Ali's essays hold many quiet surprises. In each art he searches for insight and craft---the virtues of his own patient writing."
---Susan Stewart, Chancellor, Academy of American Poets; and Professor, Princeton University

"Kazim Ali's essays, like his poems, are alive with curiosity and humanity. . . . Orange Alert makes a compelling case for the necessity of poetry on a planet wracked by war and devastation."
---Timothy Yu, Associate Professor, English and Asian American Studies, University of Wisconsin-Madison

Whether he is discussing the way cell phones have altered physical intimacy and introduced new verb forms, or the way Emily Dickinson's mysteries are more clearly revealed in French translation, Kazim Ali is at once clear and complex, rigorous and charming, accessible and demanding.

Ali discusses contemporary poetry in relation to other art forms and to contemporary television; film; and electronic media, including the Internet, YouTube, and Facebook.

He shines a light on the intersections between cultures in these essays on the craft of poetry, offering a hand to poets either geographically or metaphorically outside the mainstream of Western culture.

Kazim Ali is the author of two books of poetry, The Far Mosque and The Fortieth Day; two novels, Quinn's Passage and The Disappearance of Seth; and a memoir, Bright Felon: Autobiographyand Cities. He is Assistant Professor of Creative Writing at Oberlin College. He has been a regular columnist for American Poetry Review.