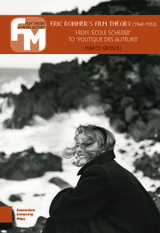 In the 1950s, a group of critics writing for Cahiers du Cinéma launched one of the most successful and influential trends in the history of film criticism: auteur theory. Though these days it is frequently usually viewed as limited and a bit old-fashioned, a closer inspection of the hundreds of little-read articles by these critics reveals that the movement rested upon a much more layered and intriguing aesthetics of cinema. This book is a first step toward a serious reassessment of the mostly unspoken theoretical and aesthetic premises underlying auteur theory, built around a reconstruction of Eric Rohmer's early but decisive leadership of the group, whereby he laid down the foundations for the eventual emergence of their full-fledged auteurism.
AUTHOR BIOGRAPHY
Marco Grosoli is an Assistant Lecturer in Film Studies at the University of Kent. He authored the first Italian-language monograph on Béla Tarr, co-edited one book on motion capture technologies and one on Guy Debord's cinema.
TABLE OF CONTENTS


0. Introduction1. A Novelistic Art of Space1.1. Sartre's ontology1.2. A novelistic ontology?1.3. Cinema: novelistic consciousness qua actual nothingness1.4. An art of space1.5. An art of appearance for appearance's sake1.6. Space vs. language1.7. An art more novelistic than the novel itself2. Alexandre Astruc: An Early but Decisive Influence2.1. Kant's transcendental aesthetics - and Heidegger's reinterpretation2.2. 'Dialectique et cinema'2.3. With and beyond Sartre's Heideggerian perspective2.4. The 'Caméra-Stylo'3. Under and On the Volcano: Rohmer's Conversion3.1. The Other3.2. The triumph of exteriority over interiority3.3. Pulling phenomenology back to its Kantian roots3.4. Ethics3.5. God?3.6. Echoes of the conversion4. The Art of Nature4.1. To show and not to tell4.2. Natural beauty4.3. Immediate mediation4.4. Movement and narrative4.5. Mechanism as the background for freedom5. Ethics at the Heart of Aesthetics5.1. On abjection: The Wages of Fear5.2. Films with a soul5.3. Tragedy5.4. Solitude morale5.5. The vertiginous moment: the reversal between inside and outside6. After Modernity: Rohmer's Classicism and Universalism6.1. Beyond modern art6.2. Classic = Modern6.3. An anti-evolutionist approach6.4. Universalism6.5. Authorship and mise en scene7. Conclusion