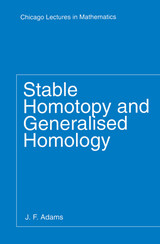 J. Frank Adams, the founder of stable homotopy theory, gave a lecture series at the University of Chicago in 1967, 1970, and 1971, the well-written notes of which are published in this classic in algebraic topology. The three series focused on Novikov's work on operations in complex cobordism, Quillen's work on formal groups and complex cobordism, and stable homotopy and generalized homology. Adams's exposition of the first two topics played a vital role in setting the stage for modern work on periodicity phenomena in stable homotopy theory. His exposition on the third topic occupies the bulk of the book and gives his definitive treatment of the Adams spectral sequence along with many detailed examples and calculations in KU-theory that help give a feel for the subject.
TABLE OF CONTENTS