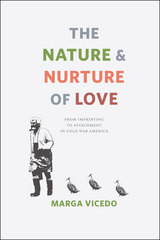 The notion that maternal care and love will determine a child’s emotional well-being and future personality has become ubiquitous. In countless stories and movies we find that the problems of the protagonists—anything from the fear of romantic commitment to serial killing—stem from their troubled relationships with their mothers during childhood. How did we come to hold these views about the determinant power of mother love over an individual’s emotional development? And what does this vision of mother love entail for children and mothers?

In The Nature and Nurture of Love, Marga Vicedo examines scientific views about children’s emotional needs and mother love from World War II until the 1970s, paying particular attention to John Bowlby’s ethological theory of attachment behavior. Vicedo tracks the development of Bowlby’s work as well as the interdisciplinary research that he used to support his theory, including Konrad Lorenz’s studies of imprinting in geese, Harry Harlow’s experiments with monkeys, and Mary Ainsworth’s observations of children and mothers in Uganda and the United States. Vicedo’s historical analysis reveals that important psychoanalysts and animal researchers opposed the project of turning emotions into biological instincts. Despite those substantial criticisms, she argues that attachment theory was paramount in turning mother love into a biological need. This shift introduced a new justification for the prescriptive role of biology in human affairs and had profound—and negative—consequences for mothers and for the valuation of mother love.
AUTHOR BIOGRAPHY
Marga Vicedo is associate professor in the Institute for the History and Philosophy of Science and Technology at the University of Toronto.

REVIEWS
“At a moment when instinct is considered a self-evident fact of human and nonhuman existence, The Nature and Nurture of Love asks a big question about the role of biology in human affairs. How did science inform the social organization of child rearing in the United States during the early Cold War era? Vicedo’s fascinating book shows that very uncertain findings in ethology, psychoanalysis, and primatology were translated into conservative cultural certainties about human development, motherhood, and the kind of nurture that children needed and deserved. Her wonderfully blunt style and refreshing skepticism illuminate the sciences of love. I can think of few other books that bring history as boldly to bear on debates about human nature, work/family balance, and the urgent question of how we care for children as women pursue lives that stretch far beyond maternity.”

“Through her astute investigation of the history of attachment theory and the modern concept of ‘mother love,’ Marga Vicedo reminds us that scientific pronouncements on the social lessons of biology tend to be freighted with prevailing preconceptions about the proper ordering of society.  She offers an insightful and thought-provoking analysis of how attachment theory developed amidst postwar anxieties about the erosion of traditional gender roles. With its remarkable cast of scientific characters (including John Bowlby, Konrad Lorenz, and Harry Harlow) and its attention to multiple disciplines (ethology, comparative psychology, and psychoanalysis), this book is certain to appeal to a wide range of readers.”

“Angst-ridden parents who fear they may not be adequately meeting their infant’s emotional needs will gain valuable perspective from Marga Vicedo’s The Nature and Nurture of Love, which shows how recent this preoccupation actually is. This thoroughly original and deeply researched study explains how leading postwar psychologists and biologists reduced mother love and infant attachment to biological instincts that stymied healthy emotional development if thwarted or unmet. Revisiting the field’s most influential animal and human studies, Vicedo levels a brilliant and provocative critique of attachment theory—one that will challenge present-day proponents to defend its central claims more rigorously.”

“More than the story of a controversy in developmental psychology, it is a compelling interrogation of a popular scientific theory, its creators, and its critics.”
— Science

“A fascinating and gripping transdisciplinary story and an absolute pleasure to read.”
— Carla Nappi, New Books in American Studies

“An engaging exploration of the development of attachment theory within the context of the Cold War years. . . . Through this historical analysis, Vicedo raises important questions concerning the adequacy of the scientific evidence supporting attachment theory. She accomplishes this while maintaining the neutrality of a historian and encouraging readers to strive to understand a theory in its scientific and social context. Recommended.”
— R. B. Stewart Jr., Oakland University, Choice

“A painstakingly in-depth account of the intellectual and social context within which Bowlby’s ethological theory of attachment came to prominence—and was both challenged and defended—in postwar America. Marga Vicedo’s careful examination illuminates the powerful cross-disciplinary alliances, selective readings of data, and neglect of criticism that helped to produce and sustain the ‘halo of truth’ surrounding attachment theory.”
— Teri Chettiar, Humboldt University, Journal of the History of Biology

“Vicedo’s work is a polemical one, arguing that Bowlby’s work tried to frame mother love as a ‘biological instinct’, and in doing so supported a conservative social agenda of motherblaming and the maintenance (or re-establishment) of traditional gender roles – ones in which the mother’s place was (by nature) in the home, looking after the children. This critique of Bowlby’s influence is not a new one, but Vicedo’s aim is to challenge Bowlby’s ideas by showing how the scientific bases for his theories were flawed.”
— Psychoanalysis and History

"Vicedo’s work opens up new avenues for exploring relationships between motherhood, biology, culture, and science and provides a much-needed analysis of attachment theory in the twentieth century. In doing so, she has given us a fresh historical perspective and a valuable synthesis of a fascinating subject, one that will no doubt pave the way for future works seeking to unravel these relationships in new ways."
— Jessica Martucci, Journal of the History of Medicine

"Vicedo reminds us of the important role historians of science play in unpacking the past while also shedding light on contemporary discussions taking place at the intersection of science and society."
— Studies in History and Philosophy of Biological and Biomedical Sciences


Introduction
1 From Imprinting to Attachment
CHAPTER 1  Mother Love as the Cradle of the Emotional Self
Introduction
Becoming Emotional
Between Overprotection and Deprivation: The Mother-Child Dyad Takes Center Stage
John Bowlby: The Mother as the Psychic Organizer
Conclusion
CHAPTER 2  The Study of Instincts
Introduction
Ethology: Lorenz and Tinbergen Search for the Biological Basis of Behavior
The Nature of Instincts
Imprinting
The WHO Meetings: Imprinting from Birds to Infants
Conclusion
CHAPTER 3  Bowlby’s Ethological Theory of Attachment Behavior: The Nature and Nurture of Love for the Mother
Introduction
From Natural Description to Social Prescription: Infants’ Needs and the Tragedy of Working Mothers
Challenging the Studies on Maternal Deprivation
Uniting Psychoanalysis and Ethology: The Nature of the Child’s Tie to the Mother
The Power of Natural Love
Conclusion
2  Challenging Instincts
CHAPTER 4  Against Evolutionary Determinism: The Role of Ontogeny in Behavior
Introduction
Daniel Lehrman: Against Konrad Lorenz’s Theory of Instincts
Behavior without Predetermination: Lehrman on Maternal Care
The Impossibility of Isolating the Innate
Hinde against Drives
Critique of Imprinting
Lorenz’s Defense
Lehrman Redux
Conclusion
CHAPTER 5  Psychoanalysts against Biological Reductionism
Introduction
Freud on Instincts
Psychoanalysis and Ethology: Natural Allies?
Anna Freud
Max Schur
René Spitz
Conclusion
CHAPTER 6  Primate Love: Harry Harlow’s Work on Mothers and Peers
Introduction
Harry Harlow
In Search of the Origins of Love: Contact or Food?
The Machine (or the Father) in the Nursery
The Machine Produces Monsters: Bring Back Natural Mother Love
The Power of Peers
The Moral of the Story: Surprise!
Conclusion
3  Naturalizing Nurture
CHAPTER 7  The Nature of Love: Mary Ainsworth’s Natural Experiments, Experimental Observations, and the Reification of Feelings
Introduction
Mary Ainsworth: From Assistant to Defender
Patterns of Behavior: From Uganda to Baltimore via London
Assumptions and Displacements: From Relation to Correlation to Causation
The Biological Foundations of Attachment
Conclusion
CHAPTER 8  Reinforcing Each Other and a Normative View of Nature
Introduction
Lorenz Appeals to Psychoanalysis
Bowlby Appeals to Ethology
Normative Nature: From the Natural to the Social
Conclusion
Conclusion
Acknowledgments
Notes
Bibliography
Index