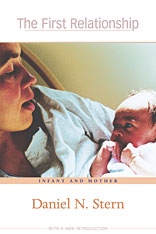 Daniel Stern's pathbreaking video-based research into the intimate complexities of mother-infant interaction has had an enormous impact on psychotherapy and developmental psychology. His minute analyses of the exchanges between mothers and babies have offered empirical support and correction for many theories of development. In the complex and instinctive choreography of "conversations," including smiles, gestures, and gazing, Stern discerned patterns of both emotional harmony and emotional incongruity that illuminate children's relationships with others in the larger world.

Now a noted authority on early development, Stern first reviewed his unique methods and observations in The First Relationship. Intended for parents as well as for therapists and researchers, it offers a lucid and nontechnical overview of the author's key ideas and encapsulates the major themes of his subsequent books.

"When I reread The First Relationship I was astonished to find in it almost all the ideas that have guided my work in the subsequent decades. At first I didn't know whether to be depressed or delighted. As I thought it over, I am encouraged by the realization that I had some basic perspective at the very beginning that was sufficiently well founded to guide twenty-five years of observation and ideas...This book makes it possible to see, or foresee, the unfolding of an intrinsic design."
--from the new introduction by Daniel Stern
TABLE OF CONTENTS
Contents
Introduction
1 Learning about Things Human
2 The Caregiver’s Repertoire
3 The Infant’s Repertoire
4 From Laboratory to Real Life
5 Where Do the Steps Lead?
6 Structure and Timing
7 From Interaction to Relationship
8 Missteps in the Dance
9 Finding Your Own Path
Notes
Index