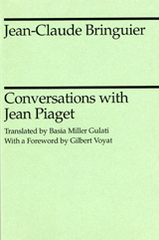 "What is most impressive about this book is its intelligence, its sophistication, and its charm. . . . This book presents Piaget's work and his person better than anything else that I know about."—David Elkind, Tufts University

"The tone is one of constant movement from the most ordinary to the most abstruse. There are 14 conversations with 'le Patron,' some in 1969, some in 1975, and several more with co-workers in various fields. . . . In Mr. Bringuier's book, in a pleasant informal way, we see a sophisticated non-scientist exploring Piaget's domain with the master. Some of Piaget's best-known findings about children as explained along the way, but Mr. Bringuier has ways of bringing out the relation of this psychological work to the whole of Piaget's enterprise, and we get a good sense of the man and his work."—Howard E. Gruber, New York Times Book Review
TABLE OF CONTENTS